But the Lord will rise upon you

And His Glory will appear upon you …

Then you will see and be radiant,

And your heart will tremble and be enlarged”

This ministry is dedicated in Jesus Christ to serve the voiceless poor who have little in the way of education, power money or influence of any kind ….so plundered body, soul and spirit it’s difficult for them to find their voice or to believe, that anyone would really want to hear what they have to say. These are the voiceless poor and they are the most honored members. Their stories are most important for they have yet to be told. What follows is a story of one more family we believe needs to be known.

Marcela was born in 1949 deep in the mountains of Guatemala (note: involuntary servitude or slavery had finally been outlawed only five years earlier in 1944). Her parents were very poor, no one in her family had ever been to school or knew how to read and they lived in a very isolated, rural area. Marcela’s dad was a very harsh man, violent with the family and especially with his wife. Her dad’s little affection was only for his boys and not the girls. His work was seasonal, involved  in agriculture. Much of the time he couldn’t find a job so when the children got hungry he would tell them to go find work for themselves to get money to eat. Marcella started to work as young as she could remember. All the children worked full time to buy corn they would bring home at the end of the day. In their community education was unknown and  none of them ever went to school.

Because Marcela was so small and young she couldn’t find field work to do so she worked all day finding fire wood to sell. At the end of the day she would sell her firewood for corn. At night she would go home with her corn, grind it and help cook for the family. Every evening she made tortillas with salt and that was their only meal for that day. (She always makes a point of mentioning the salt when speaking of her diet of tortillas.) She remembers being so weak she would fall down because she was too tired to carry the wood. She didn’t recall hearing of God or church being mentioned as a child growing up.

One day Marcela noticed in another house they had a fire on in the day as well as the night. She asked herself why they had a fire in the day time while her house only had a fire in the night. Later at that house her neighbor had a baby and the new mother went to Marcela’s mom to ask if she could work for her at her house. Her mom said yes so she went to work with this family for a little while. Working there she saw that they cooked three meals a day and was also sad because this house had food while her house had so little. It surprised her they ate three times a day. She didn’t know people did that.

She was thirteen years old at that time and was happy working with this family because they had food and she was eating well. Marcela wasn’t continually hungry now, but the time had passed for her working with the family. She was sad because she didn’t want to go back to work at home with her family where there wasn’t anything to eat. Also at this time her father got sick and passed away. Then she and her brothers started to work with someone who offer them a job doing field work on a cotton plantation. They took the job and were paid with money and fed three times a day. Marcela and her brothers where very happy because all their life they didn’t have anything to eat and were often sick but now life was much better. 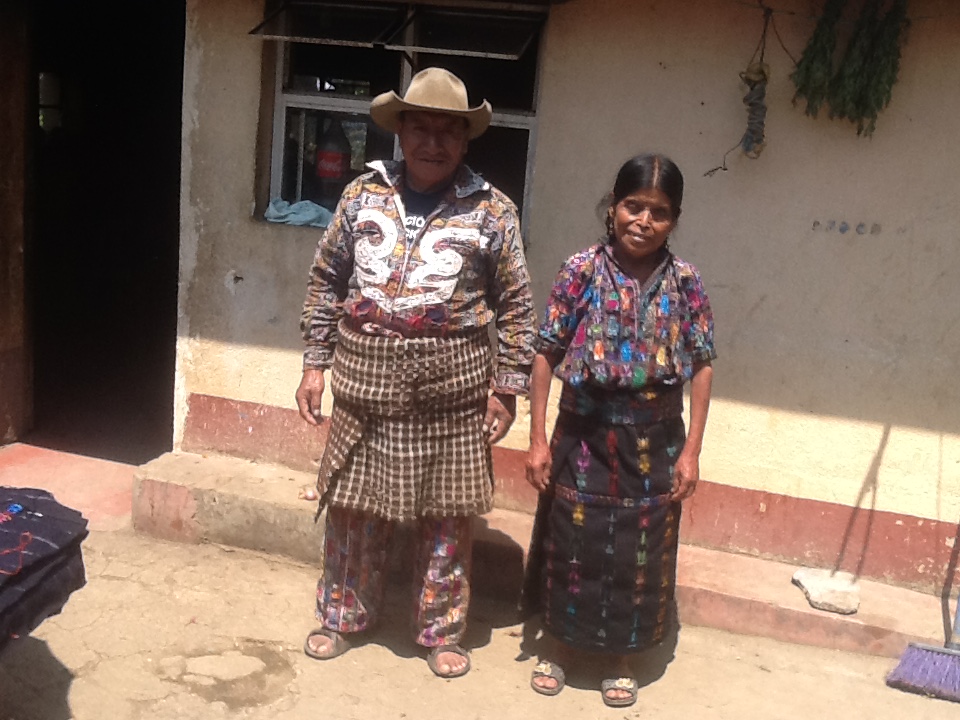 They didn’t what to ever go back home but did return five years later when Marcela was 18 years old. They had received news that her sister was going to marry an old man her mother had arranged for her to marry. The man was old and had eye problems and he didn’t walk well. Her sister cried and said she didn’t what to go with that old man at all. Marcela was afraid her mom would find another old man for her to marry doing the same thing to her she was doing to her sister.

Then she walked up into the mountains and cried out and said, “is there anyone listening to me and who will help me? God if you listen to me please help me have a happy life married to a man that I love and loves me back and we have a normal life together.” Later she was passing by a church and went inside to see what it is they do in there. She liked it as they were singing and praying and talking nice and she liked it so much she started to go all the time. One day she met a man in church and she talked to him and as time went by she fell in love with him and got married. Now Marcela lives the life she asked God for. She says, “God listened to me. He heard my voice and gave me a good husband and a good family. I am very happy now.” Her husband’s name is Aparicio, he is sixty nine years old and the happy couple have been married forty one years. God is good. Also several of her daughters come to meetings at Casa de La Paz and this makes her happy also. Her husband is a good man with her but Marcela’s mom named Clementina was and still is mad with her. This is because she married the one she fell in love with, and not the man her mom wanted to find for her. Her mom said to Marcela, “Why did you do that without my permission and also why did you go to church?” She was very angry with Marcela. Also one day Marcela heard her mother say to her aunt that Marcela was ugly and that she doesn’t like her. Marcela is 68 and has ten children and her mom is 86. Marcela cannot forgive her mother for all that she did to her when she was young. She is sad because she has pain in her heart, she needs a lot of prayer to forgive her mother and be completely happy and free in her heart. Please pray for Marcela and her mother to forgive one another and be reconciled. This will be a great miracle from God. Also Marcela can’t forget her father’s cruelty and early death. She still remembers him beating her mom and thoughts of her mom bleeding are still with her. Also one of her sons had too much fiber and he passed away also and it was hard for her to bury her child. Marcela tends to be nervous and still has some trouble eating because it’s hard for her to swallow food. She says she’s sick like that because she didn’t have good meals when she was young. (La Casa de La Paz is buying her monthly medicine specifically for her digestive problems.)

Marcela is from Monte Mercedes in Sololá department. She is very happy to be in La Casa de La Paz and gives us her house so we can have our meetings there. She says, “Women can express their feelings and problems openly and I am happy to see more women come for Gods help.” She is very happy to be with us to help her and she hopes the group grows more and more. She says God bless La Casa de La Paz.

Thank you Mercedes and Gloria for giving us Marcela’s story.